I took a ride with Todd to determine his cycling worthiness. I let him choose the ride and he decided on a ride along the Credit River to the Mill in Streetsville. Perfect for me. I’ve done that ride and I can see what he’s made of.

The salmon spawn had begun.  The Credit River was very busy with fisherman. We started up the river when I noticed a fisherman had a fish on the line. I stopped to get a few pictures. Todd is thinking to himself  “Hey what about the ride … haven’t you seen a fish before?” but he is very polite and he waits while I get a few shots. 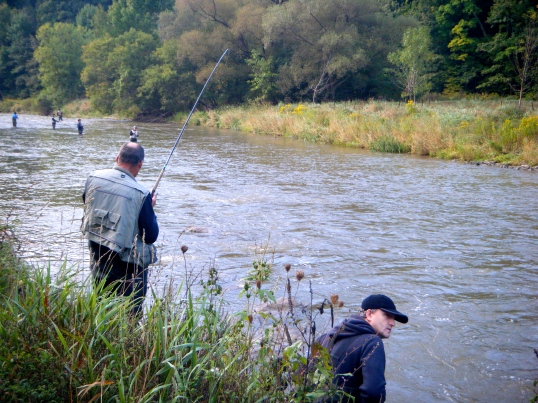 Fish on the line

Ready to net the salmon 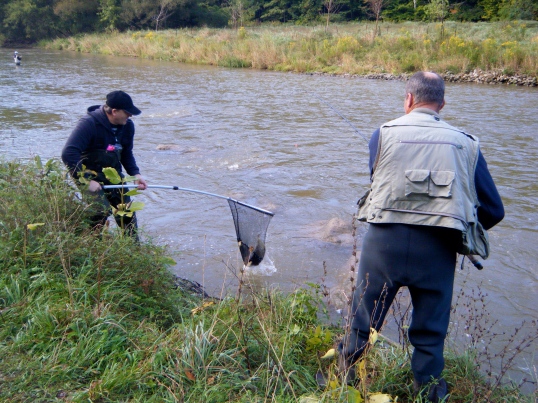 It's a nice salmon

We continue our ride up the river. There was some kind of organized walk going on because there were people every kilometer holding up a sign saying 1KM, 2KM etc. We came across a car driving up the path and we thought it was a clueless fisherman.

Being the good citizen that Todd is, he approaches the car to let them know they shouldn’t be driving up the path. Then he finds out that it is a support vehicle for the walkers. C’est la vie. We continue our ride.

Once we cross under Burnhamthorpe bridge it is much less crowded. We continue up to the 403 overpass. I’m pretty warmed up and comfortable with the pace when Todd announces “See you at the top”.  It’s a steep hill in front of us but I figure he’s going to do a quick climb then stop for a rest.

Suddenly he starts cranking on the pedals (he’s clipped in) and he disappears up the hill. I don’t know what he was carrying in his water bottle but I’m pretty sure it was RED BULL because he had wings.

I geared down and started pedaling up the hill. I wear a heart monitor when I ride. I’ve been riding all year and my maximum heart rate is about 170. I’ve hit a peak heart rate of 169 before. I’m grinding my way up the hill and I glance at my heart rate monitor … 170. I’m breathing hard but feeling pretty good and I keep grinding … 171. It’s a new record.

At this point I finally reached the crest of hill. My eyes aren’t great so I’m squinting trying to see Todd ahead. He’s just a wee little speck. It was at this moment that I determined Todd is perfectly qualified for the RRS. No three ride minimum, no 90 day probation. When you kick the President’s butt you are in. That’s the new rule.

I caught up with Todd as he waited for me by playing around in the Challenge Park. Humbled … I stopped for a moment and told him about the misadventure Mike and I had the week before. We went and visited the very spot where Mike’s “incident” occurred. After a brief moment of silence we pressed on.

It was a nice ride along the river and we ended up at the Mill as planned. I pointed out the house of fellow RRS members Scott and Elaine Bowers. We rested for a few minutes. I drank my water and Todd drank his RED BULL. We headed back.

We made better time on the way back since it is a slight downhill grade. There is another big hill as the path climbs from the valley up to the neighborhood along the 403. It was another tough climb for me. Todd met me at the top … again.

We continued along and started down a hill when a black squirrel shot out in front of Todd. I was behind Todd and I thought for sure there was going to be road kill. But the Squirrel just made it and we pressed on. I came along side Todd and I was telling him about the deer that I had seen during my morning rides in this area. Todd has done this same ride many times and has also seen a lot of deer.

Then he tells me about the time that there was a deer running down the path. Todd approached the deer from behind and he spooked the deer. It took off. Todd followed the deer as it pranced and bounded up the path. He followed it for a while until the deer turned and cut into the woods.

Let that sink in for a minute. This guy is as fast as a deer leaping through the woods. Are you getting the picture?

We continued to back track our route and before long we were back home.

As we reflected on the ride I wondered about our pace. The ride took about 1 hr 15 minutes. Hesitantly Todd responded. “It was a comfortable pace but I usually do that ride in 45 minutes.”

Holy smokes! Now I’ve got something to work towards. I’m heading to Costco this afternoon to get some RED BULL for my water bottle.

2 thoughts on “Riding with Todd”