I took an impromptu Saturday afternoon ride with Scott B to check out his newly aquired Cannondale CAAD9 road bike. The weather was overcast and 5C with wind. We met at Mississauga Road and Burnhamthorpe then headed South towards Port Credit. Just before Port Credit we diverted to follow a few paths to Indian Trail and then headed West. We followed Indian Trail to Truscott then crossed Southdown. We followed paths North until we reached the Glen Erin Trail. As we passed beneath a few underpasses I commented on the broken glass on the path. Sure enough a few minutes later I felt the rear wheel riding on the rim. Rear flat tire. I yelled ahead to Scott “Woah, Woah” but he thought I said “Go, Go!”.

I was carrying a spare tube, a pump and tire levers. It would have been about a 20 minute walk home but I decided to tackle my first ever trailside tire change.

I pulled alongside the trail, overturned the bike and removed the rear wheel. 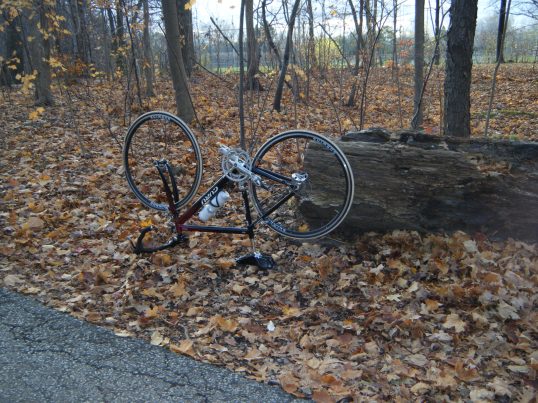 I used the giant log as a worktable to support the tire while I removed the punctured tube and replaced it with spare tube.

It was a 10 minute job and I was successful. The small pump I was carrying took a lot of strokes to fill the tire. I gave up on fully inflating the tire but it was good enough to get me home.

Scott was long gone by the time I got back home. Later Scott reported all was well with the new bike except for some discomfort with the saddle. It seems he (or the saddle) needed some breaking in.

Ironically this was also my first ride with a new Brooks B17 saddle on my Guru. The B17 fit me very well and my butt was happy. This is the same saddle I use on the Bad Boy and I liked it so much I bought a second one for the Guru road bike.

I felt a little under dressed at first, especially my ears and top of my head … but once we were going I was comfortable.  I was wearing a synthetic base layer, an “expedition” long underwear top (from MEC) and my running shell. It was a good system and there won’t be any problems riding in 0C – 5C temperatures.

One thought on “My First Flat Tire”