I extended an invite to my neighbours Erick and Steve. Erick is the “pro” level rider on the street and Steve just seemed like he might have an adventurous streak in him.

I got the Sierra out of retirement and officially christened it my “winter bike”.

It was a beautiful sunny morning and we were off at 8AM.

I had some technical difficulty with the Garmin so no official GPS maps and data from today’s ride. Bummer.

We headed down snow covered trails to Erindale Park. The frozen ground made the paths very solid with none of the usual loose gravel. From Erindale Park we followed the Culham Trail north to the Mill in Streetsville. I had expected it to take 40-45 minutes to get to Scott’s house but we did it in 38 min. The cold weather and light snow didn’t slow us down much. The heavy steel framed Sierra and the heavy studded snow tires were rolling along just fine.

On the way back Erick showed us access to some trails that I had not been on before. We decided to check them out. They were awesome. 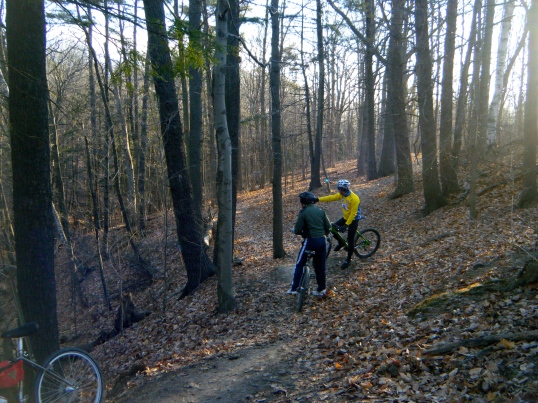 We followed the ridge around and it looped back. As we retraced our way back to the Culham Trail Erick was in the lead. He came up behind an old guy walking. I guess the old guy didn’t hear us coming because as we approached he was startled and suddenly turned. I never saw an old guy move so fast. He was carrying a walking stick and he spun around, crouched down and swung the stick like a Ninja. He swayed side so side cursing at us. I thought he was going to take a swing at Erick. It all happened so fast. We pedaled past him as he waved his stick cursing. That was a sight.

We headed back down to Erindale Park. It was strange that the Park had very little snow. Just a few km away we had much more snow at the house where we started.

After we passed UTM we passed an older couple walking their dog. We asked them to snap a picture. Here it is.

The old couple was telling us that there was a body found a few weeks ago just to the right of where this picture was taken. I hadn’t heard about it. I wasn’t even sure if they were serious. At least we got a nice picture.

We were back home in about 10 minutes from this spot. It was cold, but sunny and bright. The snow tires worked well but weren’t necessary on this ride. The snow was very light and we didn’t encounter ice. I was dressed appropriately and was quite comfortable. Better than I expected … maybe even a little over dressed. Steve and Erick reported that they were comfortable with exception of slightly cold fingers and toes.

I had a great time and a great ride. I think Erick and Steve enjoyed it as well. They proved they are the adventuresome type.  Our little group of riders grows yet again.

One thought on “Credit Valley 25k”