With an overnight weather forecast of 1cm of precipitation and 3C we woke up to a winter surprise. It snowed 3-4 inches overnight and the snow was clinging to the branches of the trees creating a winter wonderland. It was -4C.

This would not deter the RRS Winter Warriors (Ange, Erick and Drew) as we decided to adventure out.

I decided that we would work our way down toward Lake Ontario via bike paths. I was thinking that their might be less snow closer to the lake. I was wrong. 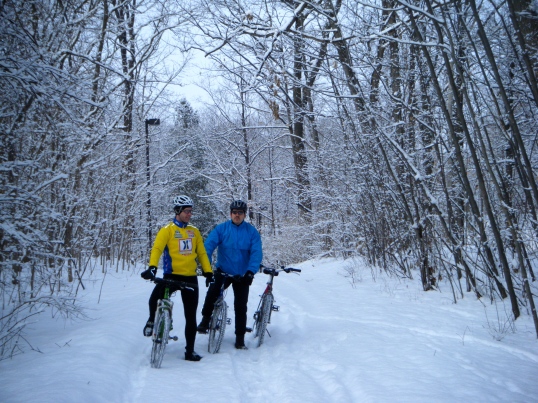 We followed paths down to the Clarkson Go Train station which was a good strategic stop to answer “Nature’s Call”. There was a lot of room left in the bike racks by the station. Winter riding has it’s advantages. 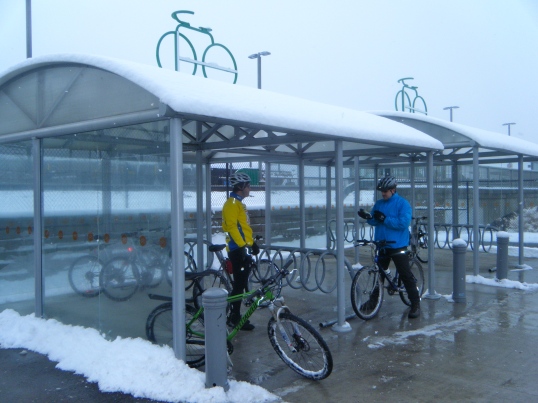 We proceeded down Southdown Road then turned left onto Orr Road. There were Canada Geese wandering around Bradley Park.

There was evidence of an accident earlier that morning. Somebody driving along Orr Road must have been watching the Geese to their left as they lost control of their car. There were skid marks to the right which ended up in a fence.

As we rode by it struck me as funny that it could have been us watching the Geese and skidding into the fence. That gave us the idea to stage a comedic re-eanactment of Ange and I careening into the fence on our bikes. Erick caught it all on the digital camera.

Re-enactment of the dangers of not paying attention on slippery roads.

As we continued we passed a man feeding a deer carrots through the fence alongside the road. 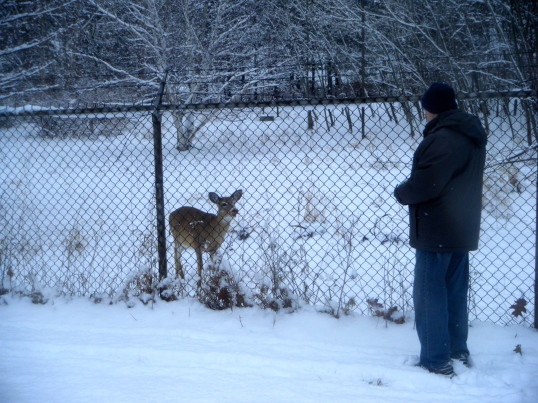 The man said there were 27 deer living in the fenced area which is on land owned by the oil refinery. As we went further along we saw many more deer right along the roadside. They did not seem too concerned about us with the exception of our squeaking brakes.

Soon we arrived at the Bradley House Museum and I took a picture of the Log cabin at the entrance. 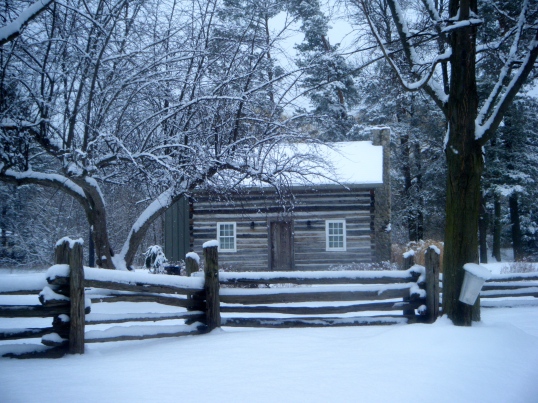 There is a “secret” path that leads from the Log Cabin to the Lake. Well, maybe it’s not secret, but it is discreet and although I’ve taken the path several times before I’ve never passed a cyclist on the path. I have passed a few walkers but this path is not as popular as the paths along the Credit River or Jack Darling Park.

The path first leads to Meadow Wood Park where there is a large outdoor rink. This morning nobody was on the rink. Erick decided to check it out as a possible destination to take his kids ice skating.

From here we continued along the secret path to Watersedge Park on the shore of Lake Ontario. 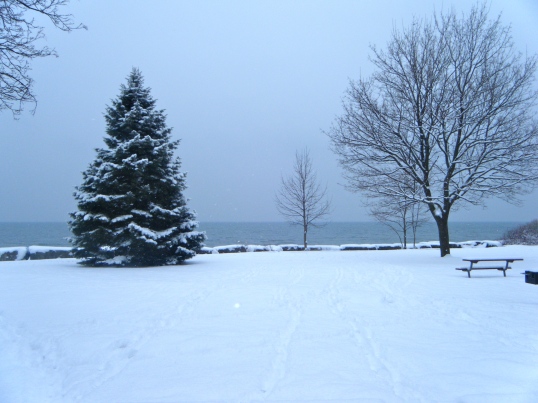 From this point we left the paths and took to the roads. We followed the Water Front Trail to Port Credit then headed North on Mississauga Road toward home.

We took a little detour down Doulton Drive off of Mississauga Road to look at some of the mansions. Ange was able to narrate a little history about several of the magnificent homes that we passed in that neighborhood. 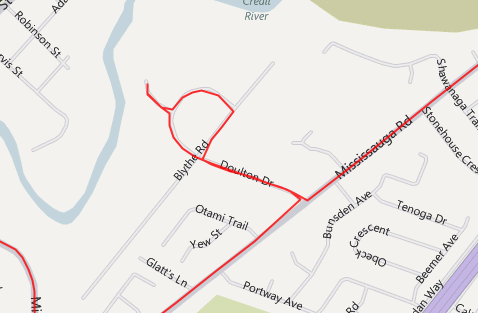 The road riding was a lot easier than peddling through the snow, however, the temperature was rising and the roads were wet. We got seriously wet and dirty on the way back.

Once we arrived home, we were able to give the bikes a good hose down to wash off the dirt and salt.

Our short snow ride turned into a 32 km tour de Port Credit. This was the longest ride that I’ve done in a while and my legs were tired by the end of the ride.

Riding through the Winter has me prepared and excited about the arrival of Spring. Until then, we’ll keep enjoying our snow rides.

One thought on “Snow Ride to Bradley House Museum 32 km”