This past weekend we were blessed with some mild January weather. I decided to experiment with taking my bike on the GO train. I have been wanting to do this for a while. Taking the train is a way for me to expand my bike riding perimeter.  I have visions of riding the GO train to distant destinations and then riding back or vice versa. 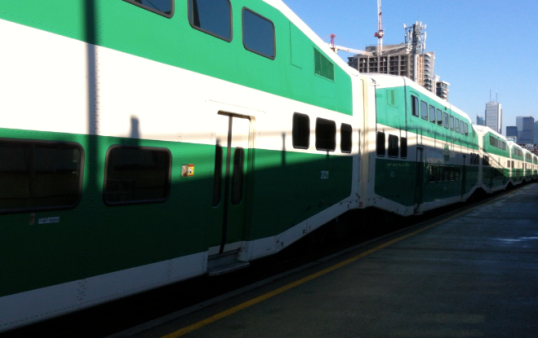 For a test run, I rode to Clarkson Station and put my bike on the GO train to Exhibition station.

When I went to purchase my ticket I asked how much extra it costs to take my bike. The response “Bikes are Free”. Then I asked if there is a special bike car. The response “Ride any car except the handicapped car”. I went to the platform and waited a few minutes. 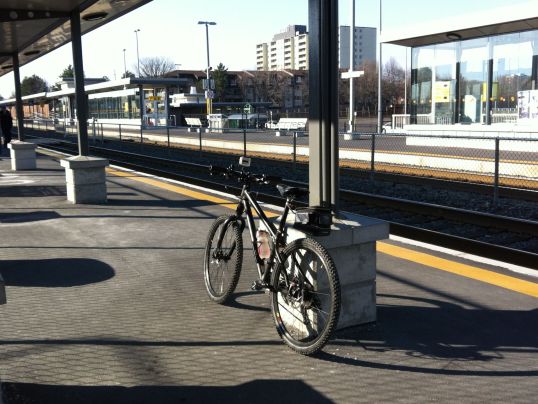 The Bad Boy waiting on a train

Then I loaded my Bad Boy onto the train.

I forgot about my Garmin GPS until it started beeping as the train clicked off the kms. I looked down and the train was doing 92.9 km/hr. My Bad Boy and I were covering some distance seriously fast.

I arrived at Exhibition and rode across Lakeshore to the Waterfront Trail heading downtown. 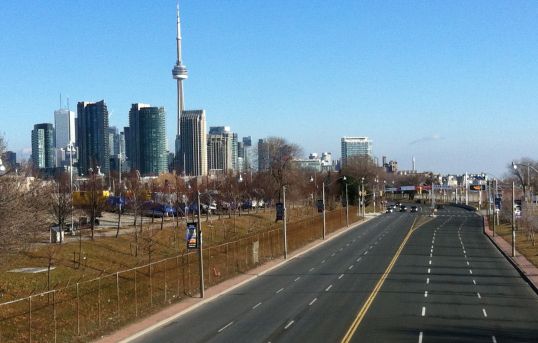 I have ridden to the CN Tower from my house several times over the summer. It is an 80km trip and it takes several hours. Riding the GO train is great away to save some time and still get into the city for touring.

My first experience taking my bike on the GO train was great. I’ll be doing this again.

I took a little bike ride to Square One shopping area tonight. That’s about a half hour ride each way from where I live.

It was a Wednesday night, early January, -2C at about 10PM. This was one of those very rare rides where I did not pass a single other cyclist. Imagine that. It was so pretty with snow covered trails and sparkly ice on the paths. I took this pic with my iPhone and it doesn’t do the scene justice. I took this from the middle of a soccer field just west of the City Hall.

The weather was unseasonably warm in November and December. We had a green Christmas. We have not had any snow in Mississauga (Toronto, Ontario) until this week.

I had a week off of work over Christmas but friends, family and errands took priority over bike riding. I still had my summer tires on the bike, until yesterday. It was cold, about -2C with a light dusting of snow. I started off on my regular tires but the bike slid on ice as I left the driveway. I didn’t want to start my first ride of 2012 with a spill so I went back to the garage and put on my Shwalbe studded snow tires.

There was a lot of ice on the trails. Riding on snow and ice is different than summer riding. I go slower and take it easy on corners. I wasn’t clipped in to the pedals … just in case. The studs did their job and I ended up having a good ride. I’ve got the layering, gloves and shoes all figured out. I was dressed perfect for the temperature.

I rode paved paths for half of the ride and then hit some dirt trails through the woods. Riding dirt trails in the winter is like riding on paved paths because the ground was frozen solid. 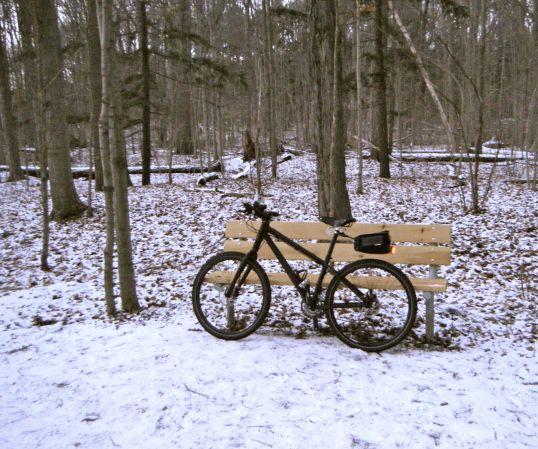 It was a very different ride than just a few weeks ago when the trails were soft and muddy. I prefer the frozen snow trail riding over mud riding.

I’m looking forward to more snow rides over the next few months.